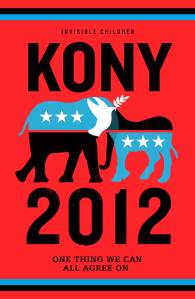 Whew! Day 1 was a great success (in my humble opinion)! My students stayed on task and made some great comments on their articles. They loved being able to annotate a document at the same time and thought it was the coolest thing that they could see what their partner was doing to the document in real time. One of my biggest challenges for Day 2 was finding an online platform for my students to discuss what they read and #Kony2012. This proved to be quite difficult! Chatzy is blocked with no hope of becoming unblocked. I didn’t want anything complicated that students had to “learn” (left out edmodo, Campfire, etc.). I also needed something that identified them and that I could moderate (left out TodaysMeet, etc). One of the ITS at another high school in my district suggested Google Groups. Since we are a Google Apps for Education district, I took this idea and ran with it!

1. When students walked into the classroom on Friday I had these instructions on the board…

2. Students in the outside circle had these directions waiting in their email…

3. In addition, if students in the outside circle expressed an interest (on their survey) of tweeting, they also had these instructions…

4. Students on the inside circle discussed the Kony 2012 video, Invisible Children, the articles they read and their thoughts & opinions on those issues out loud. I moderated this discussion if needed (although one of my classes did so well I barely said a word :)).

5. Students on the outside circle weren’t allowed to say anything out loud…they expressed all of their opinions on the discussion board and Twitter while listening to the inside circle. I embedded both the discussion board and the #RVKony TweetChat into a google site, however the students were having trouble viewing them. That’s when I added the link at the bottom of the page so that students could go independently to the google group.

6. While all students were discussing in both circles (out loud and online), I had the TweetChat on the board so all students could see what was being said on Twitter.

The day went incredibly well and I was extremely proud of my students! One discussion got quite heated while another one went so smoothly I barely had to say a word. A couple highlights from the day..
*my 3d period only participated in the online discussion because we were watching the Kony 2012 video in the gym with the Invisible Children Roadies (Deep South team).
*we were lucky enough to have Laura (from IC) come spend time with my 5th period class. She sat in the inner circle and joined the discussion. It was an amazing asset to have her there with us! (and she was impressed by how well read the students were!) In the future, it would be great to have a Roadie with each class, if possible.
*a couple other teachers/classes in the school participated in the online discussion. I tried to get the word out (sent an email about FREE lesson plans!) but it didn’t catch on quite as well as I would have liked. But this project could definitely become a larger school project with time.
*one of my students chose to come back to my class for the last period of the day and help us tweet out what students were saying (on discussion board and in class). He struggles in French, however something about this issue connected with him. He was planning on skipping and going home, however I convinced him to come to my class and help out with Twitter.

I encouraged my students to create their own opinions from the information. I didn’t care if they agreed or disagreed with Invisible Children & Kony 2012, I just wanted them to have an educated reason for what they thought. If you want more information, here are some of the resources I gathered.

This week was one of those weeks were I love being a teacher. Educating students about current events, encouraging them to think and create their own opinions, getting them involved in a REAL discussion and seeing how much they care…priceless. 🙂