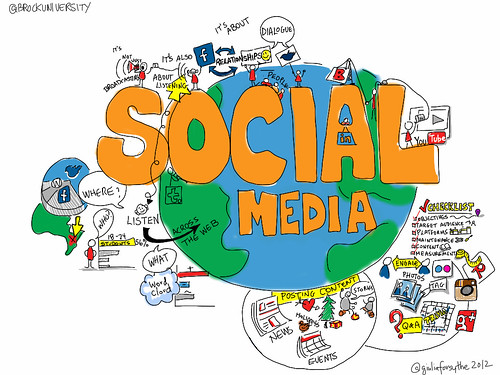 Many connected educators talk and blog about the stages of Twitter and PLN adoption (even I mentioned it). But have you ever taken a second to analyze how and why you use social media both personally and professionally?

Twitter
If I look at my Twitter account (professional), I tweet out a lot of articles. I’ve tried really hard to start including a short thought so that the tweet isn’t so sterile. I then add the title of the article, the link, a relevant #hashtag (or two) and the SOURCE. If the person is on Twitter, I find & use their handle. If the person isn’t on Twitter (rare), I include their name. Here is a sampling of what I’ve shared lately:

Some ideas for #students. Surviving in a PowerPoint Classroom goo.gl/fB4QU via @brainslides #edchat

So what you’re saying is…Tesla was awesome, Edison was not? #mindblown theoatmeal.com/comics/tesla via @oatmeal & @johntspencer

Twitter pt. 2
I also use Twitter when I’m at conferences to share what I’m learning from the workshops and keynotes I attend. In this case, I include the quote, the SOURCE and a #hashtag (or two). Here are a few from #NESA_SEC in April:

Schools are powerful jars…try not to be the lid! A challenge from @mcleod #nesa_sec

If the person doesn’t have Twitter, I still use their name:

We need to be careful not to lose sight of our students basic skills in the age of 1:1 and #edtech – Debra Riley #nesa_sec

Facebook
My Facebook use is 99% personal. However even there I tend to focus on sharing. Of my last 10 posts: 4 were stories/statements (I tagged someone else in every one), 2 were photos (I tagged friends in both), 3 were links/videos relevant to my friends, and 1 was a request for input for my little brother’s college project on Dubai.

Key Word(s)?
If I look at my overall usage of social media (I could also include Instagram, Linked In, Google+, my professional blog, Pinterest and our travel blog), I tend to focus on sharing and connecting. I don’t share things just to share – I share them to connect to other people. Hyperlinks and social media have made this possible. This is not how I began using Facebook (2004) and Twitter (2010) however. My progression to zen with social media has been years in the making. And I still struggle with whether I should keep my accounts private (Facebook, Instagram) or public (the rest).

What does your social media usage look like? How do you decide when you should (or shouldn’t) post something and where you’re going to post it (I wish I could remember where I found that link!)? The demographics of social media use are incredibly intersting. What type of social media user are you??

[Thank you to Chelsea for helping me re-find those last two links! Social media IS all about connections ;)]

View all posts by Lissa Layman